One dark night, beneath the glow of a gas heater, Adam Hattaway and the Haunters

(A.H.) emerged with a Bob Dylan record in one hand and a glass of cheap red wine in the other. They’ll take you back to the good old days when heartbreak wasn’t just something you learned about in the movies.

Based in Christchurch, A.H. has been building an international reputation in the new order of alt-rock’n’roll. With sweltering hooks and raw emotional narrative, their sound says ‘put your arm around the one you love and remember that they won’t be there forever – but maybe that’s a good thing.’
In celebration of their new single, ‘WASTING OUR TIME'(OUT OCT 2ND), Adam Hattaway and the Haunters are setting out of their third national tour!
Doors: 8.00
Music: 9:30

Diane was born and raised in New York City, and honed her skills playing folk clubs on Bleecker Street after graduating from The “Fame” School (the prestigious High School of Performing Arts) and earning a BA in Mathematics from Brooklyn College.

In 1985, she was chosen as a global ambassador for The Martin Guitar Company by C.F. Martin IV to perform on their behalf worldwide. There are two Martin Guitar models that bear her name. Diane’s songs feature meaningful lyrics woven with memorable melodies, laid over her percussive guitar style, and brought home with her saxophone like vocals.

Her music moves your heart, your thoughts, and your feet!  Diane regularly tours in Europe, has released ten full length CDs, and enjoys seeing her friends all over the world.

They are joined by their good friends and Auckland party-punks:
DICK MOVE
https://www.facebook.com/DickMoveNZ
and 5-piece noise-rockers:
MEMORY FOAM
https://www.facebook.com/memoryfoamrulez/
Guardian Singles’ hectic live shows have earned them the reputation of one of the best bands in Aotearoa. Their anthem-packed debut album enjoyed widespread success through NZ college radio, and has been picked up internationally in places as far as Denmark, Italy, and Colombia.
Band members Fiona Campbell (Vivian Girls, Coolies), Thom Burton (SoccerPractise, Wilberforces), Yolanda Fagan (Na Noise, Echo Ohs) and Durham Fenwick (Green Grove) will play favourites from their debut, alongside blistering new material that they’re recording for their second album in March 2021.
Check out the link below for the live video of Guardian Singles playing “Midnight Swim” at Gonerfest 2020!
https://www.youtube.com/watch?v=Y-zZeGYtgcs…
Get your tickets via undertheradar.co.nz or $20 on the door
Read more
Feb
19
Fri
Auckland City Scoundrels @ LEIGH SAWMILL CAFE
Tickets
Feb 19 @ 8:30 pm – 9:30 pm

The boldest and brashest Second Line band in all the land, serving up originals, New Orleans favourites and modern classics straight to your earholes.
The ‘Auckland City Scoundrels’ are Auckland’s newest and tightest second line jazz band bringing the dirtiest and funkiest renditions of your favourite songs straight to your earholes.
Keep your eyes and ears open for the ACS parading through the streets and alleys down town, and mingling through the Auckland bar scene in classic Orleans style.
Read more
Feb
23
Tue
Chorus Fibre Network Information Session @ Leigh Hall
Tickets
Feb 23 @ 11:30 am – 1:00 pm

Chorus are holding a community drop in event. The event is being held so that people that don’t really understand about fibre, can come and ask the Chorus team questions about our work and how to get connected should they wish to. Just for your information, unless the driveway is longer than 200metres then there is generally no cost to install the fibre to the home – other than the typical monthly fee retail service providers charge to have a broadband package.

WCJ deliver a fresh acoustic approach to songs that you know, with a clean sound blending each performers diverse style. Their live energy is rhythmic and fun and audiences are always thoroughly engaged with their warm ‘kiwiana’ delivery and technical flourishes. 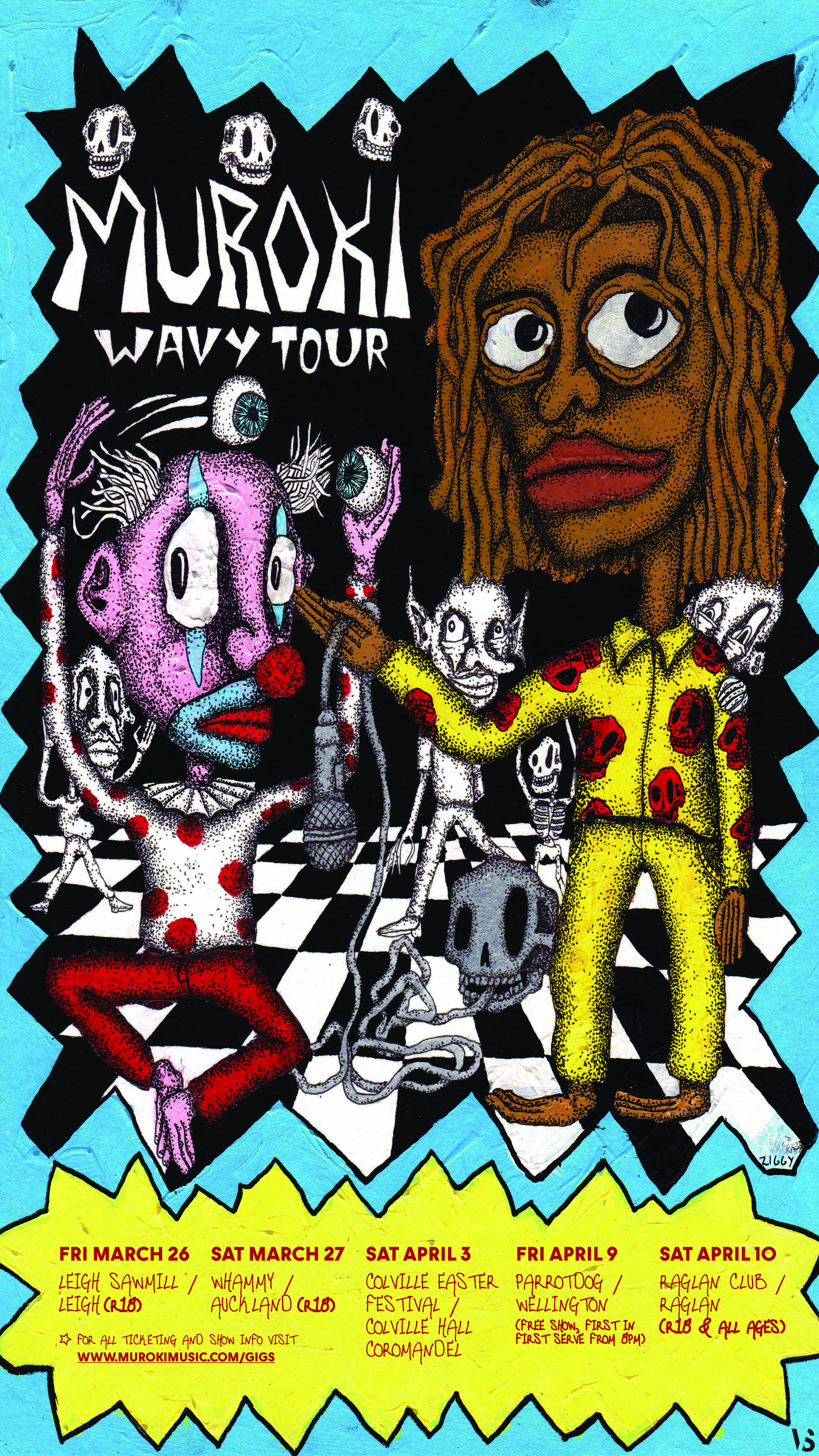 The hypnotic slice of pop is the second cut from the young Raglan musician’s forthcoming EP and these shows are his first since breaking his arm in a skateboard accident. The Wavy Lyric video is a fun, simple take on the artwork for Wavy – an enticing couple dancing to the deep beat.

March and April dates see Muroki and his band mixing some small town dates in Leigh, Raglan, and Colville with headline shows in Auckland and Wellington.

After stunning RNV and Nestfest performances, that skateboard tumble in the Raglan town bowl put paid to many of Muroki’s plans (he also plays in popular Raglan groups Masaya and Cloak Bay) but he has already been back in the studio finishing up more tracks and planning a big 2021.

Wavy is Muroki’s third single release. His self-released debut For Better Or Worse caught the ear of BENEE and she was soon playing the song to Elton John and the worldwide audience on his Rocket Hour Radio show. She next invited him not only to join her sold-out October tour but to be the first artist signed to her new Olive record label.

WCJ deliver a fresh acoustic approach to songs that you know, with a clean sound blending each performers diverse style. Their live energy is rhythmic and fun and audiences are always thoroughly engaged with their warm ‘kiwiana’ delivery and technical flourishes.

We leave limited tables in for pre-show dining from 6pm. It definitely pays to book ahead.

Read more
Mar
28
Sun
RiddimYard – Fish & Bread Sound System @ LEIGH SAWMILL CAFE
Tickets
Mar 28 @ 2:30 pm
Fish & Bread is back again for Riddim Yard #7, at the Leigh Sawmill.
Once again we’re back in the Sawmill yard, running roots, dub and more in a sound system fashion.
Come and join us!
Sunday, March 28th, 2.30-6pm.
Read more
Apr
17
Sat
A Night of Fleetwood Mac @ LEIGH SAWMILL CAFE
Tickets
Apr 17 @ 9:00 pm
Celebrate the music of Fleetwood Mac with premier 5 piece band-
The Fleetwoods.
After sell out South Island shows in 2020 we are delighted to be returning to the Leigh Sawmill, so book your ticket now for an intimate dose of Fleetwood greatness.
Featuring a great band of top musicians performing two fantastic high intensity sets – from the Peter Green era through to the 80s favourites. With all the hits from Landslide, The Chain, Rhiannon – don’t miss this great night out.
Tickets $25 from Under The Radar
Read more
May
14
Fri
Miles Calder – Album Release Tour @ LEIGH SAWMILL CAFE
Tickets
May 14 @ 8:00 pm

Wellington singer-songwriter Miles Calder will embark on a nationwide tour this April and May in celebration of his debut solo album Autopilot Life, out today. The ten shows will see Miles and his band perform in intimate venues across Aotearoa, captivating audiences with a dynamic set ranging from floating atmospheric ballads to chomping rock n roll.
Four years on since his folk/Americana self-titled release with former backing band The Rumours and time living overseas, Miles has emerged with a renewed sound, fresh songs, and new band. His new album Autopilot Life takes his classic folk-rock style into a striking psychedelic realm, evoking early 70s Lennon and late-era Beatles as much as contemporaries like Kevin Morby and Father John Misty.
Banished Music & Undertheradar Presents
Miles Calder Album Release Tour 2021
with Full Band

Coming off a great run of gigs in Auckland, the band are heading north to the famous Sawmill Cafe in Leigh. Come ready to groove and shout lyrics to the best of all Bowie songs!