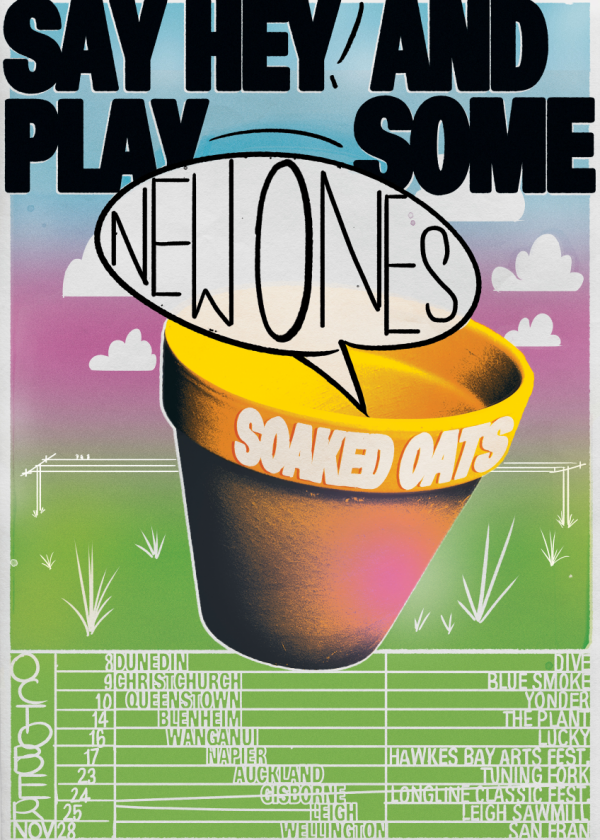 SOAKED OATS – SAY HEY AND PLAY SOME NEW ONES

Having recently finished the first wave of recording for their debut album, Soaked Oats are taking to the road this October for a string of shows up and down the country. The ‘Say Hey and Play Some New Ones’ tour will see them greeting faces throughout Aotearoa and trying out some new material for the first time. The band will be supported and joined on stage by DJ and friend ‘Hot in the City’ + a few surprise support acts. Dates below:
Soaked Oats are a young four-piece band that percolated into existence in Dunedin, New Zealand in 2017. Catapulted by their infectious and joyful shows and fast-evolving song-writing chops, the band’s profile and fanbase are on a steep rise.
The indie sludge-pop group have become known for endearing live performances, music that has given the band access to tours throughout the UK and America. 2019 saw the release of their most accomplished work to date, the Sludge Pop EP. The band’s single ‘Coming UP’ was discovered by indie-rock icon Sharon Van Etten who shared to her 90 thousand plus fans and lead to sell-out shows across Australasia.
“Soaked Oats rather neatly push the parameters of pop-rock into interesting corners which gently have reference points in alt.country, post-New Wave atmospherics and moody dream-pop.”
– Elsewhere
“A healthy dose of familiar southern jangle, a wry sense of humour and a bold rhythm section.”
– NZ Herald
“There’s something infectious about their sound; it’s happy, it’s relaxed and a little bit cheeky.”
– Pilerats